The forehead tissue weakens with aging, more and more deep wrinkles start to form and eyebrows start to sag. This accounts for an older, tired and sometimes even austere look.

An endoscopic brow lift is a cosmetic surgery technique to correct the frowning muscles where necessary. This is done by detaching the skin from the forehead and stretching it upwards so that wrinkles are softened and eyebrows look younger. 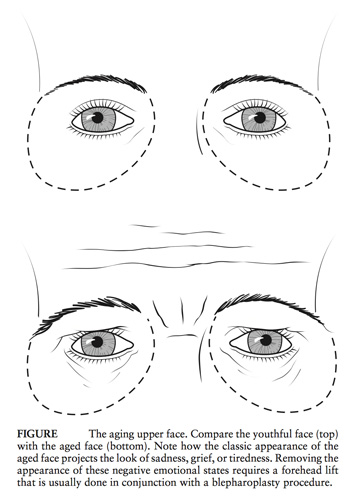 For traditional brow lifts an incision had to be made across the scalp from one ear to the other. The endoscopic technique only requires three small incisions along the hair line. Not only is the healing process much shorter, also scars are hardly visible. 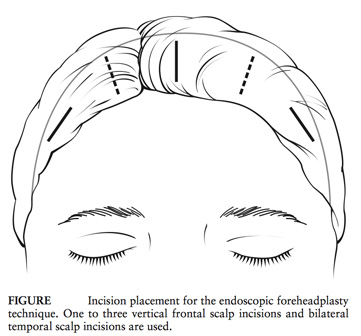 The characteristic signs of the aging forehead that are addressed with the forehead lift procedure are:

The specific surgical goals for any forehead plasty procedure are to

Forehead plasty under endoscopic control is performed using three to five scalp incisions (Fig. Below). Initial dissection is performed through the scalp incisions over the upper forehead at either the subperiosteal or subgaleal levels and between superficial temporal fascia and deep temporal fascia in the temporal fossa safe zone areas before the endoscope is inserted. Release of soft-tissue attachments along the superior orbital rim and modification of glabella muscles is performed under endoscopic control. After the released forehead flap is transposed, superficial temporal fascia is fixed to the stable deep temporal fascia with sutures placed through the transverse temporal scalp incisions. These sutures stabilize the lateral eyebrow segment. Through the vertical scalp incisions, screws drilled into bone tunnels made in cortical bone are used as a fixation mechanism to anchor sutures that can suspend the medial eyebrow segment, if desired. Buried absorbable forehead anchoring devices were recently introduced into clinical practice. One end of this absorbable device is pressed into a small drill hole made in the skull, and multiple tiny hooks at the other end of the device grasp the undersurface of the forehead flap to support it. With one of these devices in place stabilize the flap, the scalp incisions are closed with staples or sutures. Redundant scalp produced by the forehead flap advancement at the temporal incision closure line may be excised. The advantages of the endoscopic technique are the limited incisions and controlled dissection.